In climate change discussions, everybody talks about temperature. But weather is much more than that. There is at least rain and wind as directly experienced quality, and air pressure as measurable quantity. In the Netherlands, some observation stations have more than a century of daily data on these things. The data may be broken in the sense that equipment and location can have changed. To quote: "These time series are inhomogeneous because of station relocations and changes in observation techniques. As a result, these series are not suitable for trend analysis. For climate change studies we refer to the homogenized series of monthly temperatures of De Bilt link or the Central Netherlands Temperature link." Since I am not looking at temperature but wind, I will keep to this station's data.

Plot of mean wind speed shows several effects. There is an equipment change just before year 2000. At the beginning of the curve the values are lowest, while in the sixties there is a bit more wind, as was n the nineties. I wonder about that. Is that equipment? I can imagine that hundred years ago there was lesser equipment giving such a change, but fifty or twenty years ago? Finally, close to the end of the war there is missing data.
ggplot(data=r4,aes(y=rFG,x=Date))+
geom_smooth()+
geom_point(alpha=.03) +
ylab('Mean wind speed x (m/s)')+
xlab('Year') 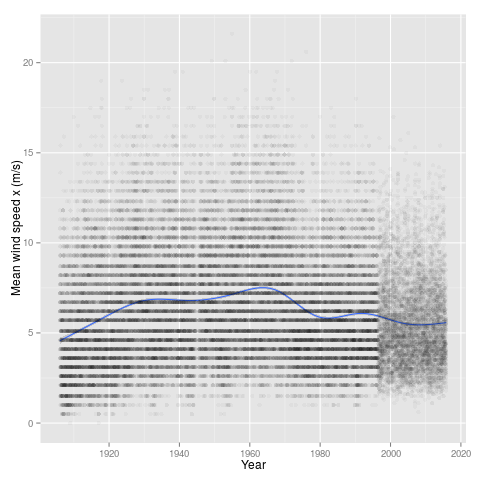 A second plot is by month. This shows somewhat different patterns. There is still most wind in the middle of last century. However, September and October have the most wind just before 1950, while November and December have most wind after 1950. Such a pattern cannot be attributed to changes in equipment. It would seem there is some kind of change in wind speeds then.
r5 <- group_by(r4,month,year) %>%
summarise(.,mFG=mean(rFG),mFHX=max(rFHX),mFXX=max(rFXX))
ggplot(data=r5,aes(y=mFG,x=year)) +
geom_smooth(method='loess') +
geom_point(alpha=.5)+
facet_wrap(~ month) 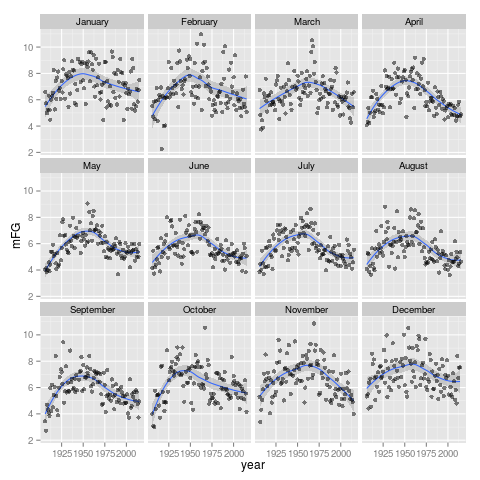 In the Netherlands there is a clear connection between wind and the remainder of the weather. Most of the wind is from the SW (south west, I will be using N, E, S, W to abbreviate directions from here on). N, NW, W and SW winds take humidity from the North Sea and Atlantic Ocean, which in turn will bring rain. In winter, the SW wind will also bring warmth, there will be no frost with W and SW wind. In contrast, N, NE and E will bring cold. A winter wind from Siberia will bring skating fever. In summer, the nice and sunny weather is associated with S to E winds the E wind in May is associated with nice spring weather. SE is by far the least common direction.
The circular package has a both density and plot functions. Combining these gets the following directions for the oldest part of the data.
par(mfrow=c(3,4),mar=c(0,0,3,0))
lapply(month.name,function(x) {
xx <- r4$rDDVEC[r4$year<1921 & r4$month==x]
xx <- xx[!is.na(xx)]
density(xx,bw=50)  %>%
plot(main=x,xlab='',ylab='',shrink=1.2)
1
})
title("1906-1920", line = -1, outer = TRUE) 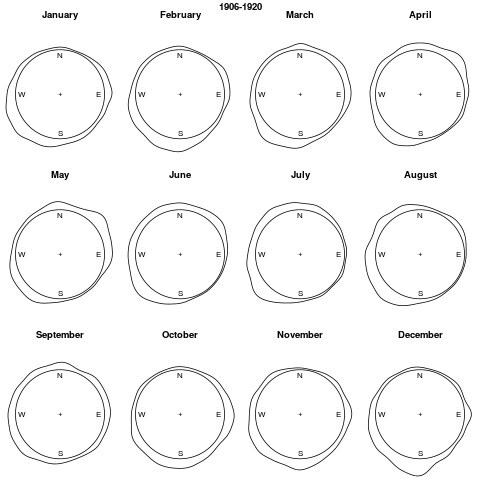 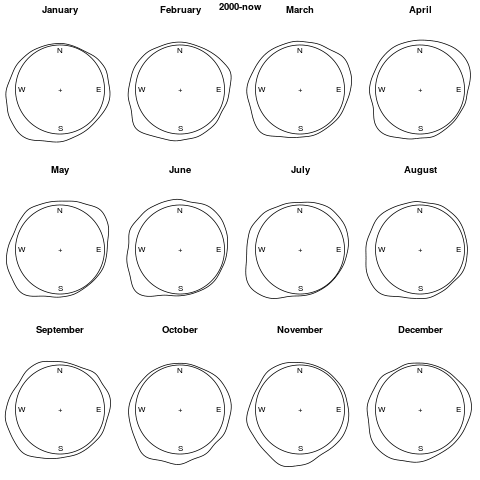 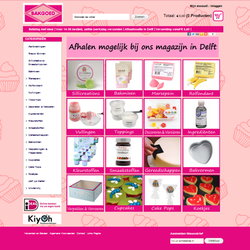