I have never done a post for PI day. This year I want to do so.

So, we all know the simple estimation of PI based on random numbers. The code used here is chosen for speed in R.

Since I read documents with Clopper-Pearson a number of times the last weeks, I thought it a good idea to play around with confidence intervals for proportions a bit; to examine how intervals differ between various approaches. From a frequentist side Clopper-Pearson, which is described as the frequentist's gold standard and secondly the easy way normal approximation. From the Bayesian side, binomial with beta Beta prior. Obviously, the intervals have completely different interpretation in the frequentist and Bayesian framework, but that is a different discussion. There will be no data in this analysis, I am just making intervals based on possible results

Since I want to repeat many of these calculations, I first made some supporting functions. This is because I am trying to write more clear code, where as much as possible code is not repeated but rather delegated to some sort of function. That may not result in the shortest or fastest code, but at this point neither is required.

The first functions create the intervals from n (observed) and N (total). Clopper-Pearson is extracted from binom.test(). Normal approximation is based on an internet example. Beta-Binomial has three functions, one for the actual work, two to set up the desired priors and adapt the naming. A final function calls all these.

Results for a proportion correct 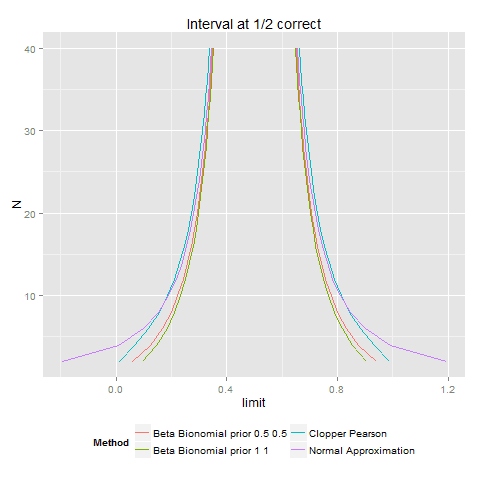 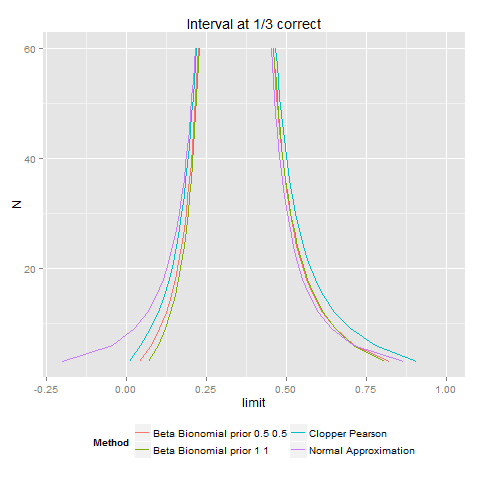 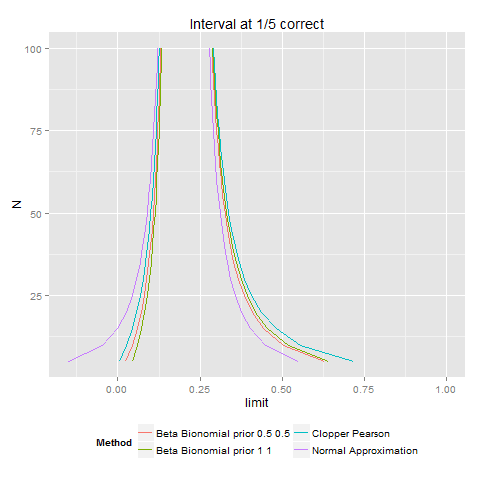 It seems that especially at lower N the Normal approximation is not advisable. Having an interval stick outside the range 0-1 is obviously a dead giveaway that something is not correct. But even if that does not happen, the lines are pretty far of the remainder of the methods. The difference between the two Beta Binomials is surprisingly small and only visible when very few observations are made. Clopper-Pearson seems to give slightly wider intervals than Beta Binomial.

Results for a fixed N

Again, the code is variations on a theme, with the work being done by the supporting functions. 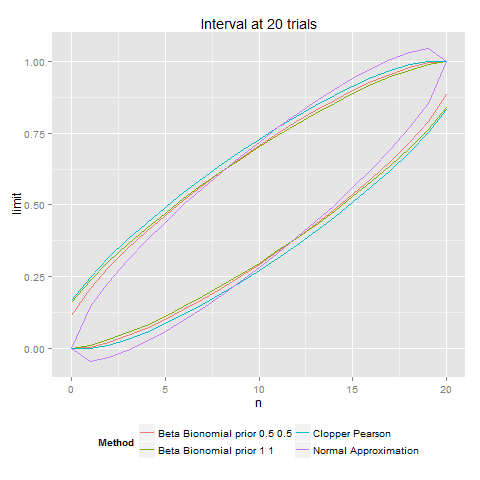 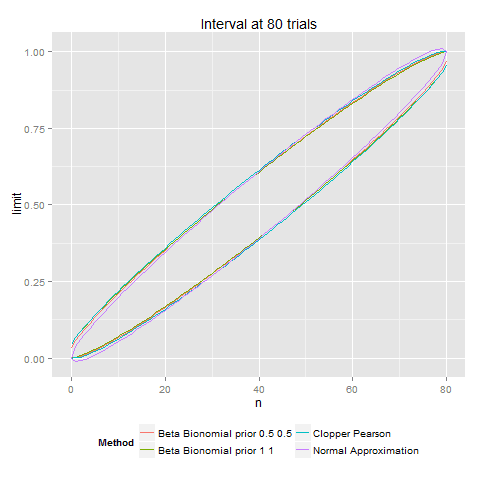 Again the normal approximation is the odd out. It also seems to degenerate at n=0 and n=N. Other than that the choice of prior in the Beta Binomial is more expressed that the previous plots.
Posted by Wingfeet at 19:51 No comments:

A couple of years I have made plots of unemployment and its change over the years. At first this was a bigger and complex piece of code. As things have progressed, the code can now become pretty concise. There are just plenty of packages to do the heavy lifting. So, this year I tried to make the code easy to read and reasonably documented.

Data is from Eurostat. Since we have the joy of the Eurostat package, suffice to say this is dataset une_rt_m. Since the get_eurostat function gave me codes for things such as country and gender, the first step is to use a dictionary to decode. Subsequently, the country names are a bit sanitized and data is selected.
library(eurostat)
library(ggplot2)
library(KernSmooth)
library(plyr)
library(dplyr)

To make plots I want to have smoothed data. Ggplot will do this, but it is my preference to have the same smoothing for all curves, hence it is done before entering ggplot. There are a bit many countries, hence the number is reduced to 36, which are displayed in three plots of 3*4, for countries with low, middle and high maximum unemployment respectively. Two smoothers are applied, once for the smoothed data, the second for its first derivative. The derivative has forced more smooth, to avoid extreme fluctuation.

In general, things are improving, which is good news, though there is still ways to go. As always, Eurostat has a nice document are certainly more knowledgeable than me on this topic. 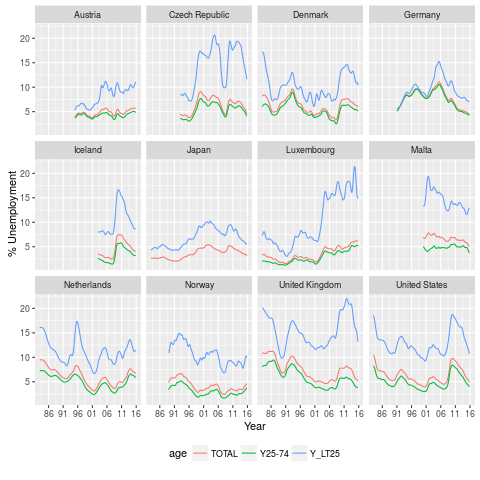 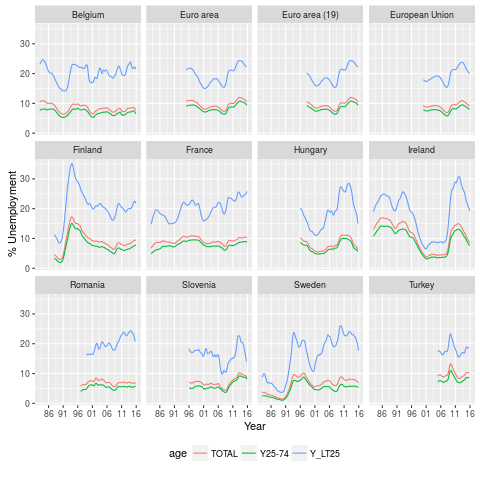 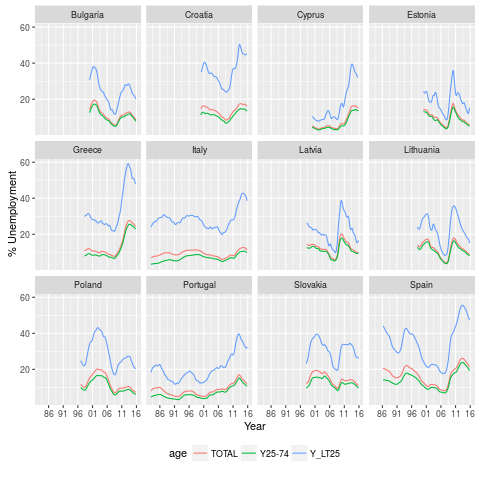 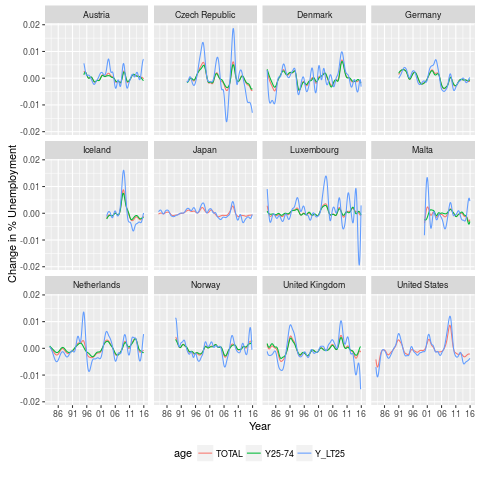 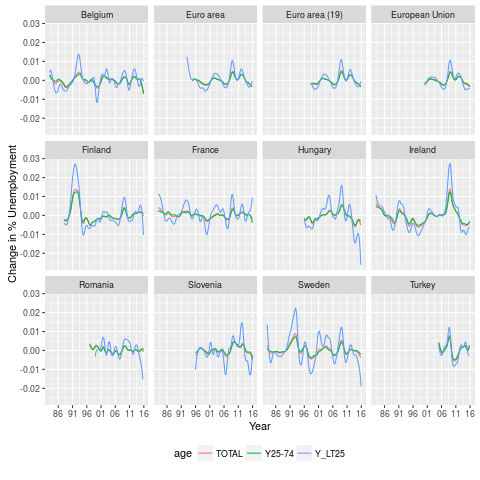 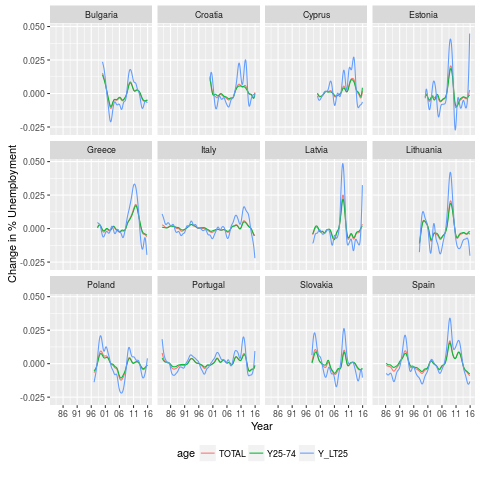 I was browsing Davies Design and Analysis of Industrial Experiments (second edition, 1967). Published by for ICI in times when industry did that kind of thing. It is quite an applied book. On page 107 there is an example where the variance of a process is estimated.

Data is from nine batches from which three samples were selected (A, B and C) and each a duplicate measurement. I am not sure about copyright of these data, so I will not reprint the data here. The problem is to determine the measurement ans sampling error in a chemical process.
ggplot(r4,aes(x=Sample,y=x))+
geom_point()+
facet_wrap(~  batch ) 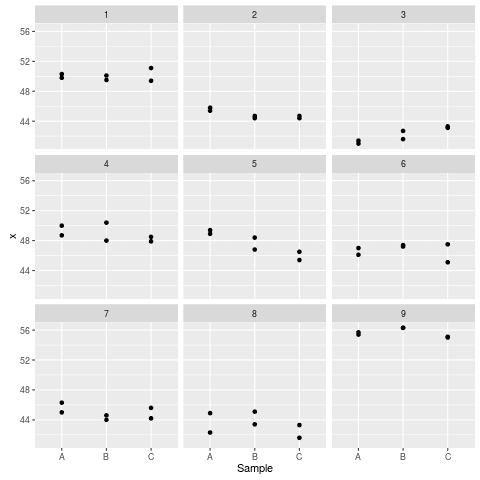 At the time of writing the book, the only approach was to do a classical ANOVA and calculate the estimates from there.
aov(x~ batch + batch:Sample,data=r4) %>%
anova
Analysis of Variance Table

A plot of 'Who works at home'

I ran across this post containing displays on who works from home. I must say it looks great and is interactive but it did not help me understand the data. So I created this post to display the same data with a boring plot which might help me. For those really interested in this topic, census.gov created a .pdf which contains a full report with much more information than here. 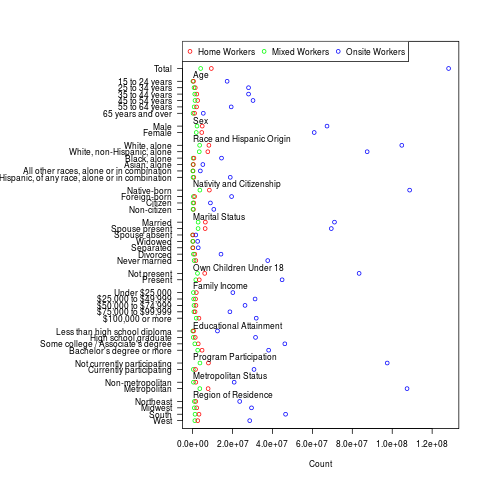 Why I did not use ggplot2?

I also tried the system described here: http://wresch.github.io/2014/05/22/aligning-ggplot2-graphs.html, but I think width has changed in content, could not get that to be satisfactory. 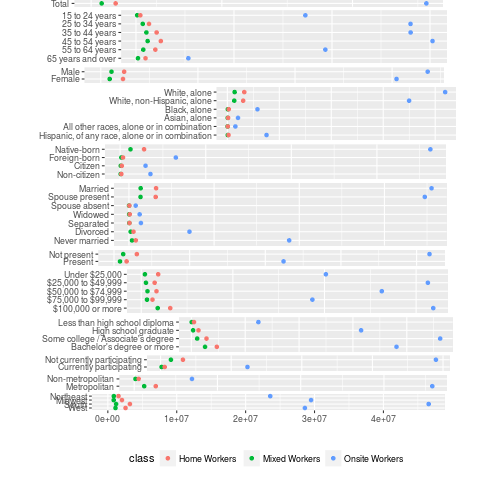